Digital Arts Renaissance in the Cloud

In the final weeks of 2011, I drove to Berkeley to interview the founder and digital artists at McNeil Studio to hear first-hand about their first experience using cloud computing services to create a fast-moving animation based on paper origami designs.

I shot a video and wrote this article for Intel Free Press — Cloud Computing Democratizes Digital Animation — focusing on the impact of cloud computing — paying for on-demand supercomputer power from datacenters owned by Amazon.  The story also appears in Silicon Valley Watcher.

The idea of sending pieces of a render job out to different computers to crunch was novel and felt somewhat risky, but the results, the speed and the cost all had the McNeil Studio team singing the praises of Amazon’s Elastic Cloud Computing service.

I was also drawn into the actual creative process and how they turned
paper origami figurines into an engaging animated story for my employer,
Intel, which wanted to redesign its consumer technology website with
examples of how people can use their computer to do amazing, dazzling
things in life. 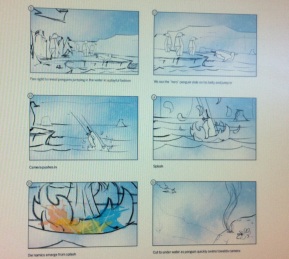 I crack up at the penguin scene.

The final version is at Intel’s Unfold What’s Possible site.

2 thoughts on “Digital Arts Renaissance in the Cloud”