Brian Solis is pioneer of moving the PR industry into and beyond the PR 2.0 era. He’s also an Intel Insider, one of 10 social media advisers I get to work with. 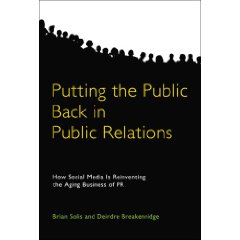 I shot the video (at bottom) during the “Are PR Agencies Dead?” panel at South by Southwest 2009 just days before Brian’s new book was released called “Putting Public Back in Public Relations.”

This is one for the ages, an accessible read for students studying Journalism/Public Relations in college…and a great addition to my BookStack.

Over the past three years, I’ve seen Brian grow more prolific, helping so many people with his insights about PR, about how to best use social media and networking tools and how to go off and do something wonderful with your online persona. Today, he even has an interesting Micro Disruption Theory and The Social Effect.

Brian is someone well worth any free or multitasking time you can spare.  Here is a widget that will let you follow Brian Solis’ great photography, blog and Twitter posts.

I found this today on Paul Gillin’s blog:

Maggie Fox’s Social Media Group, which is one of the most innovative boutique agencies specializing in new media marketing, has developed a new version of the Social Media Press Release (SMPR), which was pioneered by Shift Communications in 2006.

The SMPR differs substantially from the traditional press release, which is often long, detailed and inflexible. The new format emphasizes many points of entry, so that journalists and bloggers can pick and choose the information – and the media – that they wish to use. The latter point is important. With so many media outlets today using images, audio and video to tell a story, the traditional press release doesn’t meet their needs very well. The SMPR makes room for story-telling through whatever media the publisher wishes to use. It requires more work on the client end, but should result in much better results.

Another innovation in this new version is its use of popular back-end services like YouTube and Flickr to host content. This means that people can find the information through search engines as well as via the press release.

Maggie has made the template available for anyone to use under a Creative Commons license. She has a more detailed explanation here. Or you can just download the template in PDF format.

This has been a stop and start and stop topic for my team since March 2007.  Hope this year we have better luck.  This is not a big complaint, because our team was able to turn on some other very cool features like a Chip Shot section for mini updates tailored for journalists and tech bloggers.

Lots of buzz about the the big investment in Facebook that set off calculation artists to figure the funnest site on the virtual planet is valued at $15 Billion. Wow! My advice: Don’t buy it!! Let it live, breathe and be free to grow…at least for a while longer.

Here’s something just announced today by the company I work for, Intel. Press release is pasted below. But my mind is swirling, connecting numbers. What do they really mean? At a cost of $3 Billion, Intel’s new Fab 32 chip making plant in Arizona is rapidly pumping out nearly a billion newly minted Intel transistors onto each multi-core chip coming out soon. OK, actually on the new quad core chips, it’s estimated to be about 840 million newly designed transistors built using Intel’s Hafnium-based high-k metal gate silicon technology.

Press Release from 10/25/06: Intel is opening its newest state-of-the-art microprocessor factory (called Fab 32) in Chandler, Ariz. as it prepares to ship its first 45nm processors on Nov. 12.

Context: Manufacturing capacity and modernization are key differentiators in today’s competitive market for microprocessors. Intel invests heavily in its global manufacturing network, including a $3 billion investment in Fab 32, to ensure it can meet the demands of the market, and is quickly ramping production on its 45nm process technology. Two more 45nm factories will open next year.

Relevance: With 1 million square feet and more than 1,000 employees, Fab 32 is Intel’s latest environmentally friendly factory that will manufacture tens of millions of the most energy-efficient processors the company has ever made. These processors are based on Intel’s groundbreaking transistors with Hafnium-based high-k metal gate silicon technology, the biggest change to how transistors are made in 40 years.

Here is a fun, educational animation shared during the Intel Developer Forum in San Francisco last month. Following the animation is a video shot inside Intel’s fab and research facility in Oregon in January when Intel first showed working processors build with the new, smaller, energy-efficient transistors.

Tom Foremski of PodTech and SiliconValleyWatcher posted a timely video about the challenges of getting your company’s IT department to use or implement social media tools.  Timely because Tom will be hosting a similar panel at the Intel Developer Forum, but this panel will feature IT pros, legal experts and bloggers rather than marketing and communications pros — more here.

More people are having these kinds of experiences at work and it’s helping us all learn and actually try new things with some grounded expectations — i.e. getting people to engage and interact rather than clocking the number of hits or downloads.

Before we move to the video, here is a brand new effort by Intel — Open Port, where IT pros and enterprise technology experts/enthusiasts can come and learn, ask questions, vent, meet people and help people understand how to use the latest tech tools for businesses.  At first this will seem heavily voiced by Intel propaganda, but most of the stories, studies and information is about things Intel IT pros are learning as they work inside Intel and with IT shops at other companies.  I hope this helps break down any walls that are keeping IT pros from running as fast as they’d like to use new technologies that help people do what they want, like and need to do in life.  Of course security and risk awareness is important, but these are two issues that IT pros will has out when they gather around together with open minds and share.

Josh Hallett and Alex Kim, from Solution Set, talk about building social media platforms within enterprises and the roadblocks that IT departments create. Lots of good advice on overcoming those obstacles. A Silicon Valley Watcher report from a meeting of the Third Thursday club held at Voce Communications, in Palo Alto. Also on TechOne: Larry Magid’s report on Google Docs and Spreadsheets; and Michael Cote talks with William Hurley about commercial open source.

David Meerman Scott talks with Jennifer Jones of Marketing Voices about his new book The New Rules of Marketing and PR. Engagement of a community, and having good content are key to success in this new environment.PR is focusing more on public relations rather than media relations these days, but the meaning of Public and Media are both important and ever changing.   It’s really about building and maintaining meaningful relationships.

There are lots of new rules out there, and this book hits an important moving target.

This is one from Jeremiah Owyang that I gotta check out.

This can be a way to bring to the corporate pressroom feeds of blogs and media you follow. Adding widgets to corporate Web sites can help bring your site to life, and you can alter the content to meet calendar events or company happenings. By having a feed like this in a pressroom, it shows what and who is of interest to the company and it can be a forcing function that gets company storytellers or experts to chime in whenever they see incorrect information pop up on a feed.

On the day Yahoo! announced earnings that were not well received, this is a timely and cool interview timed to a very cool event happening this week in P-Town (Portland), where my pals Jeremiah Owyang from PodTech and Intel buddies Bryan Rhoads and Josh Bancroft will be. Hope they’re enjoyin’!!

PodTech’s Jennifer Jones talks with Brian Solis, who I got to finally meet in in June at the Social Media Workshop hosted by Shel Israel.  He’s someone we can all learn a lot from.

Brian dinged Intel’s Second Life briefing, referring to a blogger who wrote a post tearing into the Second Life event as an example of terrible PR. At the time, Brian was right and timely. A few days later, I learned that the Intel Software Network team reached out to the blogger and now things are cool. In fact, there was a healthy exchange that resulted in new friendships. Maybe in the old days, a bad review would resulted in some frustration and a little bad reputation. But today, we have the tools to connect and face our challenges directly, resulting in more changes to make improvements and better friends.

Integrated efforts.  Integrating across teams.  Integrating new and traditional media outreach.  All of this is super important to VPs and group managers…and team players who do this already to produce great stuff through team work across groups.  But what swirls through my mind is that integrating is actually about pooling resources to create “content” to share stories, tips, share knowledge with interested people and invite the not-yet interested to share their attention.

The Intel corporate communications team wanted to show and tell what the new “Santa Rosa” — now known as Intel Centrino Duo and Intel Centino Pro — technology is all about…so that we could put the call out to people and companies who might be interested.  So we saw that a marketing team wanted to connect with IT pros.  Together we pooled resources and create a five-part audio and video Podcast series.

Here are the first four stories.  Watch for a great video next week, possibly featuring IT experts from EDS, HP, Altiris and others.  See how Intel IT is looking at Intel Centrino Pro laptop technology to fit in with servers and desktops built with Intel vPro technology — manageability is the key.  I have some fun photos and more insight to share in a near future post on this blog.  The aim is to show some folks how teamwork, collaboration and finding the right, real-deal people can help tell great stories.